May 9, 2016 by Deb Mahoney MOTHERS, Uncategorized 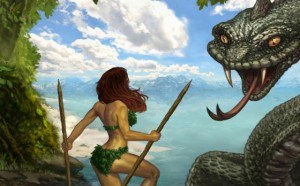 Through out the Bible there are many stories of amazing women. I would like to dedicate this Month of May to some of the Awesome Mothers in the bible. I chose 8 simply because 8 represents a new beginning. We all know how much we can benefit from a new beginning. Right? The book of Genesis is loaded with some magnificent mothers but Our Original Mother is Eve and this is who I would like to speak on first.

Genesis 3:16; “Unto the woman he said, I will greatly multiply thy sorrow and thy conception; in sorrow thou shalt bring forth children; and thy desire shall be for thy husband, and he shall rule over thee.”  As a woman this is our cross to bear. Imagine how Eve must have felt knowing that due to her transgression she was the cause of this curse upon every WOMAN to ever be. She acted on her own authority when she chose to eat of the tree of knowledge of good and evil. How that must have felt to be in this beautiful garden with everything you would or could ever want are need right at your fingertips and then nothing but the struggles of the world. That’s like having the home of your dreams. No worries about money, food, bills all paid then one day you are homeless with nothing. No more dream home, no more money, no more food, but bills galore.

Eve was mother to Cain, Abel, then later Seth and based on Genesis 5:4 many more. Eve had no blueprint to follow, no role models as examples and she had no internet like most of us mothers in today world. Created by God she was the first woman born of no sin. She was also the first woman to commit sin. Her beauty was so that no woman to this day can compare. She was the first wife, the first to bear children and the first mother to bury her child. Her son murdered by her other son. She actually lost both of her children that day. With the sorrow promised she was fruitful and she did multiply.

Eve was an amazing woman created from dust, the rib of Adam and in God’s image. There isn’t much about her in the Bible and though we can only imagine about her it saddens me that the only thing we remember Eve for is tempting Adam to eat of the forbidden tree. There was so much more to her than that. Her role as an obedient wife, a helper, and most importantly an excellent mother was worth speaking of. Through God’s grace all things are possible and she did fulfill God’s promise she was fruitful and she did multiply. This means she is and will always be the original mother to humankind. With that being said Gods Will be done.