May 26, 2016 by Deb Mahoney MOTHERS, Uncategorized 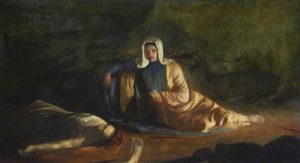 A descendant of Esau’s, Rizpah, Genesis 36:24; 1 Chronicles 1:40; 2nd Samuel 3:7, loved her sons so much that she defied traditions at all costs when it came to them. Saul took her as a concubine and she bore him, 2 sons, Armoni and Mephibosheth. Ishbosheth, another son of Saul by a different woman, accused Abner, a cousin, of incest with Rizpah, and enraged by such an accusation Abner transferred his allegiance from Saul to David 2nd Samuel 3:7-21. And now the story begins.

Rizpah story is centered around treaties and covenants made by Israel and Gibeonites, Joshua 9; Johnathan and David 1st Samuel 20; and, Saul and David 1st Samuel 24. These incidents were a direct connection to the death of her sons Armoni and Mephibosheth along with 5 of Saul grandsons. Sins of the father literally killed these children. Let me explain this if I may.

Okay so, Saul, who was known for his pride and self-will, broke an oath that was made with the Gibeonites by Joshua. Although the idol worshipping Gibeonites had deceived Joshua, a treaty with them had been made, and an oath not to destroy them by the sword was sealed in the Lord’s name. But when Saul came into power he brought about the destruction of Israel’s enemies, and treated the Gibeonites as a heathen settlement in a holy land, endeavored to annihilate them. As soon as Saul met his death on Mount Gilboa, the Gibeonites wanted revenge because of the disrespect of the oath given by Joshua. When David’s asked what could be done to appease their anger they requested the death of 7 of Saul’s sons and David granted the request in the hopes it would bring an end to the 3 years of famine.

2nd Samuel 21:10 And Rizpah the daughter of Ajah took sackcloth, and spread it for her upon the rock, from the beginning of harvest until water dropped upon them out of heaven, and suffered neither the birds of the air to rest on them by day, nor the beasts of the field by night. Imagine how this woman must have felt to have her sons ripped from her home and murdered for something they did not do. All murdered and hung from trees on a hill,  left to the elements and animals. I don’t know about you but this would have been the hardest thing in the world for me witness. She went past her grief and watched over her dead.  She protected her dead from wild animals,  she shooed away buzzards and when their decomposed bodies hit the ground she was there to catch them. Armed with sackcloth, the Israelite symbol of mourning and repentance she stretches the cloth out to a Rock. She didn’t care about any treaties or covenants all she cared about was protecting the remains of her children.

What an amazing, fearless, loving mother this woman was to defy the rules and do what no man had ever done by watching over her sons deceased bodies without the permission of the Gibeonites. In the rain, during the sun blazing high, in the cold of dark nights, fighting wild animals, buzzards, and other birds she made sure they were protected. These innocent men were given what was considered the worst punishment. To die as such they would suffer exposure to humiliate them even in death. Word got back to David how Rizpah had protected her sons and David requested the remains of Saul and his son Johnathan, which were stolen, to be respectfully and properly buried.

Ya’ll all know that we mothers who love our children unconditionally will go through a lot to protect the m when they are wronged. This woman made the ultimate sacrifice when it came to this.   Lord knows she went above and beyond the requirement of loving and taking care of her children. We tend to allow our children to adapt to their surroundings and make their own mistakes as a learning process but what would you do if the mistakes of the father fall on the children? No fault what so ever of their own.  My question to you guys is, “Are you willing to protect your children no matter what the consequences as Rizpah did with her children?” Will you go above and beyond the call of duty?  With that being said God’s will be done.