May 15, 2016 by Deb Mahoney MOTHERS, Uncategorized 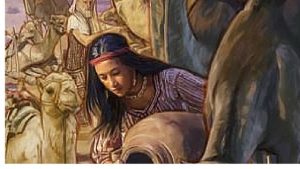 Rebekah was the one to give Abrahams servant a drink of water as well as his camels and offer him a place to sleep in her fathers home to accommodate him and his camels. This act of kindness exposed her to the blessing of God and she was the chosen wife to Isaac.

As a maiden around twenty years old married Isaac at the age of 40, she was as they say, “fair to look upon,” meaning she was exceptionally beautiful. It was love at first sight for Isaac. She was a virgin, and had a childlike quality about her. In these times we know that beauty carried its dangers and history would repeat itself. During their stay in Gerar, Isaac was afraid that Rebekah would catch the eye of that king so he lied and passed Rebekah off as his sister, Genesis 26:7-11. A course of action that his father Abraham made before him with his mother Sarah and I’m so sure he learned this line deception from his father. Isn’t it funny how history often time repeats itself through our children?

Rebekah was barren for 20 years of their marriage, though she was a praying woman and no stranger to God it was her husband who prayed for her to conceive a child and she was blessed. In GENESIS 25:23-26; The Lord said to her, “Two nations are in your womb, and two peoples from within you will be separated from thy bowels; and the one people shall be stronger than the other people; and the elder shall serve the younger; 24 And when her days to be delivered were fulfilled, behold, there were twins in her womb. 25 And the first came out red, and all over like an hairy garment; and the called his name Esau. 26 And after that came his brother out, and his hand took hold on Esau’s heel; and his name was called Jacob: and Isaac was threescore years old when she bare them.

Mother to twins Esau and Jacob, Rebekah was modest and meek, frank and open, full of faith and her graciousness matched her physical beauty. When she became a mother she revealed how masterful and clever she could be. Rebekah showed her weakness when she pushed Jacob into tricking his father to steal Esau’s blessing with a bowl of soup. Genesis 27:2-13.  Jacob himself had already stole Esau birthright with a bowl of soup, Genesis 25:29-34. I guess my Daddy was right when he said, a man would do just about anything when he was hungry. You see, Esau was his fathers favorite and Jacob was Rebekah’s favorite and though this act of trickery seems to be scandalous God said before they were even born that two nations were to be born and the elder shall serve the younger. But knowing this didn’t stop Esau from being in his feelings and hating his brother so that he wanted to kill him.

I can’t tell you enough that God doesn’t make a promises that He doesn’t keep and what He promised in Genesis 25:23-26 did come to pass. Even though Isaac and Rebekah made the same mistakes then that many parents make today which was chasing favorites among their children therefore causing sibling rivalry. This is something that all parents should guide against. The results of such actions can cause conflicts in your home that can go on for many years. Sibling rivalry is something that we as parents should squash as soon as it rears its ugly head. With that being said God’s will be done.