May 12, 2016 by Deb Mahoney MOTHERS, Uncategorized 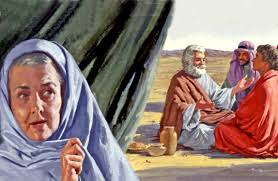 Sarai laughed inside her head, laughed because she was 90 years old when God promised she would bear her husband a son. How dare she laugh at what God said. Didn’t she know that God never made a promise that He didn’t keep? I guess she didn’t as she decided to take matters into her on hands.   Figuring God was taking too long to keep his promise she gave her handmaiden, Hagar as a surrogate to have a heir for her husband. But in her defense she did it because she loved her husband so very much and wanted to help him fulfill the promise. How desperate she must have been. She had to be feeling awfully sorry for herself and I’m sure she was ridiculed amongst the women who were able to have children. I can only imagine how she must have felt when she saw a a woman with child. During those times being barren was like a death sentence for a woman, you just wasn’t whole if you could not bear an heir.

It didn’t matter that Sarai and Abram were filthy rich.  That they had everything they could ever need.  Everything but the one thing they wanted most and that was the son promised by God. Ahh the plot thickens and God was getting them ready for his promise in Genesis 17:5; Abram name became Abraham and Sarai became Sarah, Genesis 17:15. The Hebrew name Sarah means Princess or Noblewoman. Sarah was to become the Mother of many nations and God was setting the stage.

Genesis 21:1-3; And the LORD visited Sarah as he had said, and the LORD did unto Sarah as he had spoken. For Sarah conceived, and bear Abraham a son in his old age, at these time of which God had spoken to him. And Abraham called the name of his son that was born unto him, whom Sarah bare to him, Isaac. She had to be the happiest woman ever.   She must have loved that baby boy to death and she had to be a very protective mother after that long wait. She knew the promise that God made and she knew her son was very important. Sarah’s loyalty to Abraham resulted in her sharing in his blessings. She became the mother of many nations. Sarah was obedient to her husband even when he passed her off as his sister in Egypt, Genesis 12:10-20, and again in Gerar, Genesis 26:6-13. She remained loyal and her love steadfast for him and he did love her too. Abraham was blessed with all these riches and became very wealthy which made her blessed and wealthy as well.

You know, we are what you would call a right now people. Come on, you guys know exactly what I‘m talking about. We want what we want, right now when promised to us. We just don’t know how to wait.  For example, remember when we were kids and our parents would promise to take us to the zoo or something fun but didn’t say when we were going? We would ask everyday, “Are we going today, When are we going, Why we ain’t going today?” Only for our parents to say, a little irritated, that if we keep bugging them we wasn’t going anywhere   We all know that patience it is a virtue.  We know that good things come to those who wait as well but If patience is such a good thing, why is it so hard? That’s right, hard.   Most good things don’t come easily but when they come they are well worth the wait! With that being said God’s will be done.