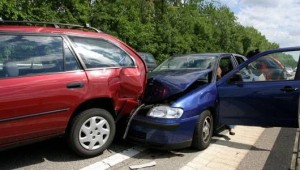 Staking Your Claim While Changing Lanes

Changing Lanes a 2002 movie about a young hot shot Wall Street lawyer and a struggling insurance agent who are involved in a fender bender while changing lanes on the freeway. They realize that they are both due at the same courthouse in courtrooms literally next door to each other. The Lawyer leaves the insurance agent on the road stranded causing him to miss his custody hearing, which would have blocked his ex-wife from taking their two sons to live in another state. The Lawyer accidentally drops crucial power of attorney documents at the scene of the collision that the insurance agent now has.

Both men do morally reprehensible things to one another in an attempt to recover their territory.  Each one becomes more and more vindictive with their vicious actions until they almost kill one another. This made them both take a look at themselves and neither of them liked what they saw. In the end the lawyer represents the struggling insurance agent, pro bono, to get custody of his sons while his estranged wife moved out of the state to further her education…The insurance agent gave the hot shot wall street lawyer the documents to submit to the judge to win his law firms fight. In the end they were both able to claim their territory by helping one another Stake their Claims.

How many times have you been in a fender bender of life changing lanes while attempting to stake claim to your territory? How many times while in your natural self you left something important behind that was detrimental to your salvation. Our morality should never be in question when we are Staking Our Claims to be in God’s Good Grace.  We are taught that God is LOVE. That even when we are not righteous in our plight to be one in the body of Christ God still loves us.  In order to get to where God wants us to be to get what he promised we will have to change lanes.  When we are changing lanes let us not forget what our mission is.   Please remember when we are aggressively attempting to take back what belongs to us we should do it without malice. It is important to know that when you get to the point where you have to change lanes in your life that you don’t create a collision that will leave who or what you are trying to claim on the side of that road.